Those who soared and the fallen. The Airshow

In 2015 I spent about a week covering the Quonset Airshow in Rhode Island. This is really just a taste. We were given access to everything from the multi-branch security meetings to the field hospital and more. But, it’s a bit much for this blog post that really just started because I wanted to post some of the portraits. 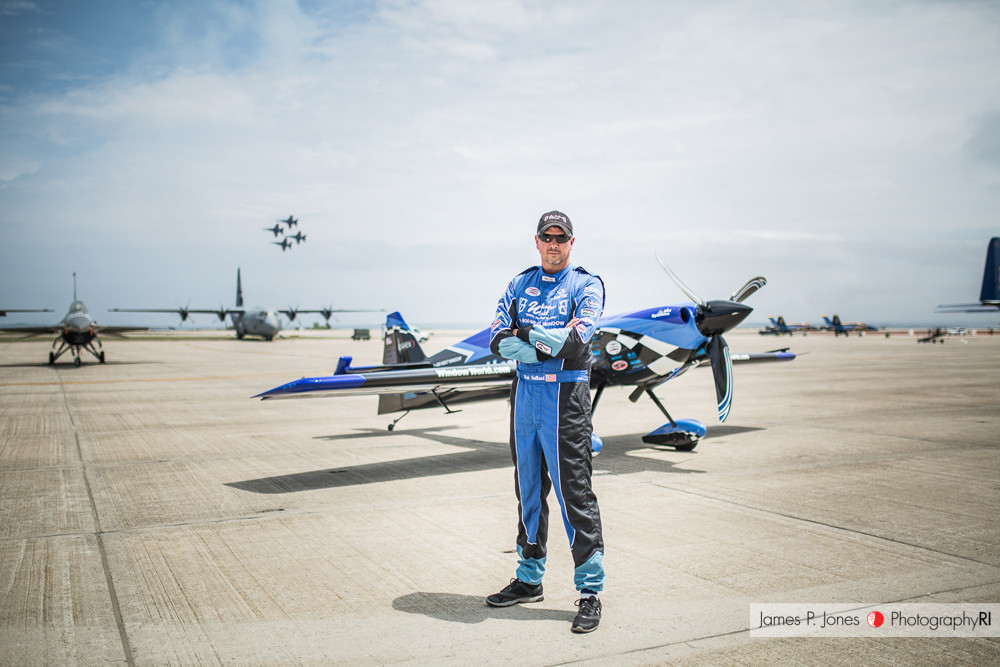 Rob Holland is a local kid, sort of. In New England we’re all in it together most of the time. Unless you are from Connecticut. We view CT with a bit of distrust due to the proximity to New York. So, Rob being from New Hampshire we’re pretty sure of his allegiance to all the right sports teams. 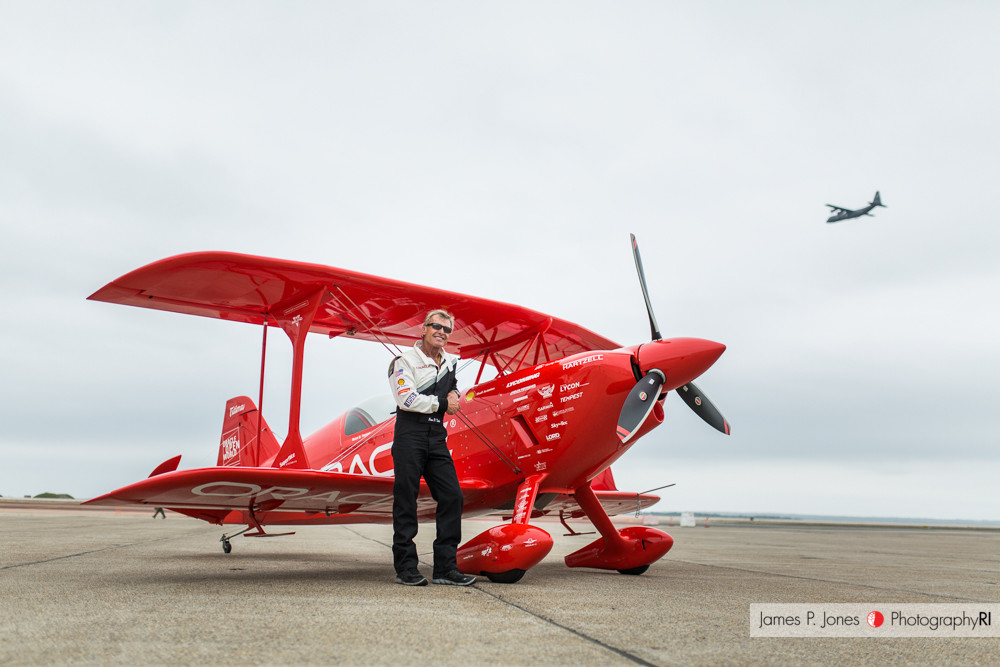 Sean Tucker is a legend. So, he gets to fly a bright red plane and be sponsored by Oracle. When he isn’t climbing in planes he’s apparently climbing mountains. I’m not sure how old Sean is but it’s older than he looks. Something about that California sunshine does a body good (at least it looks good) . 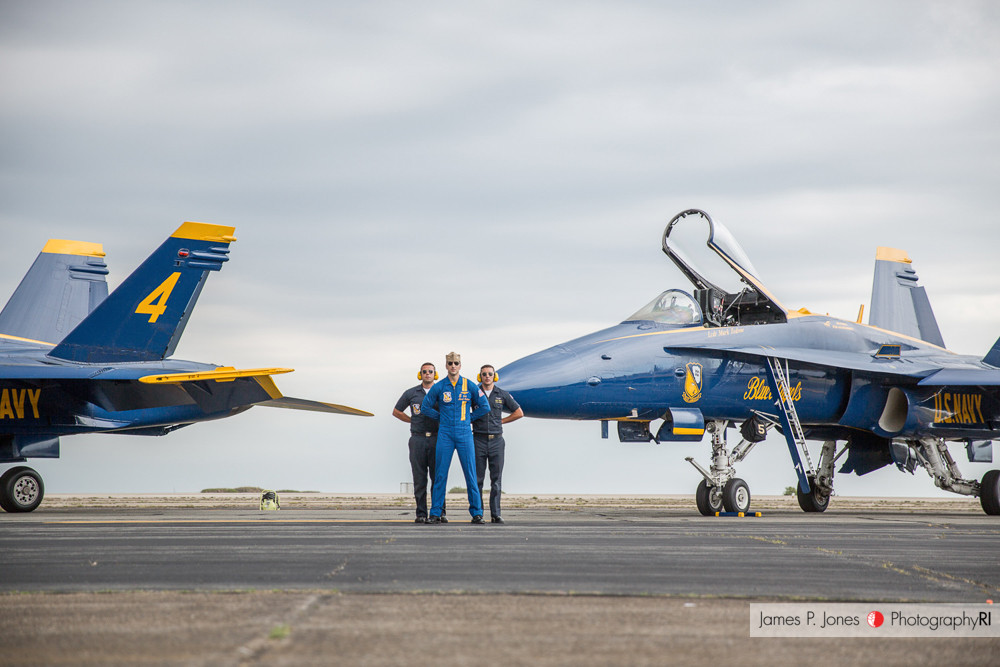 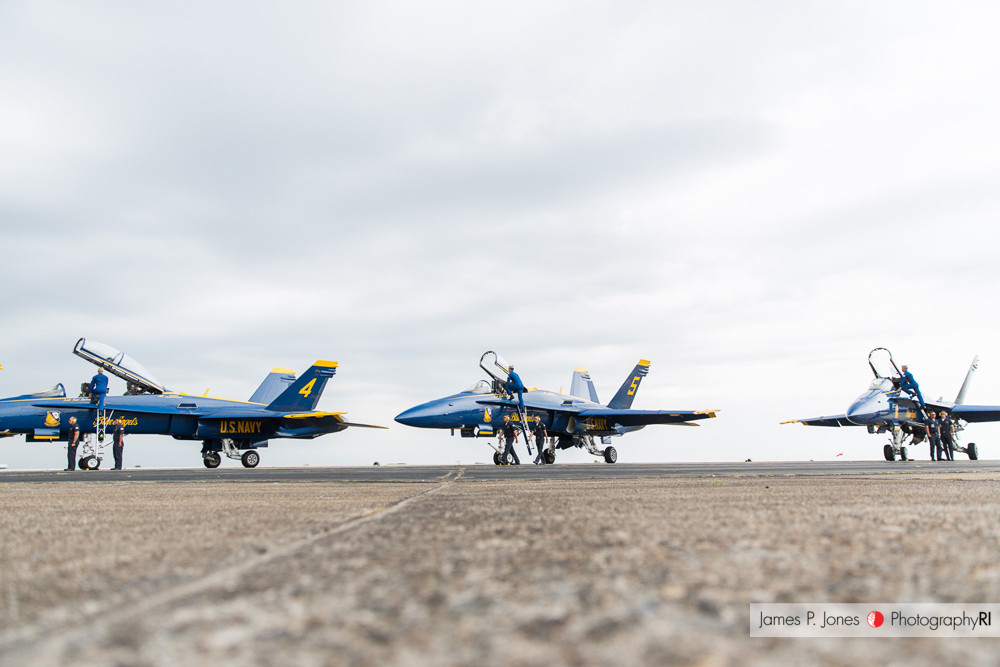 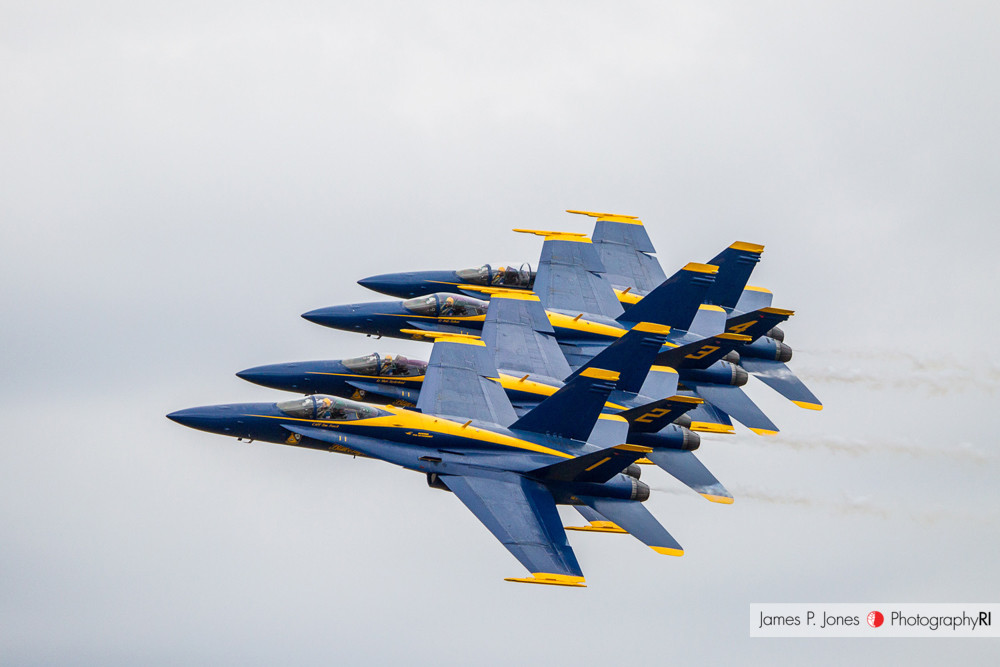 These guys (and gals as of 2015) do things in these monstrously powerful machines that make you think they are just pulling strings on puppets. The precision is unbelievable. I wasn’t able t0 post photos of the pilot that was lost earlier this year because the photos were under embargo. But, this post is dedicated in memory of the young father and extraordinary Marine aviator I had the privilege to photograph last year. Capt. Jeff Kuss (photo at end). 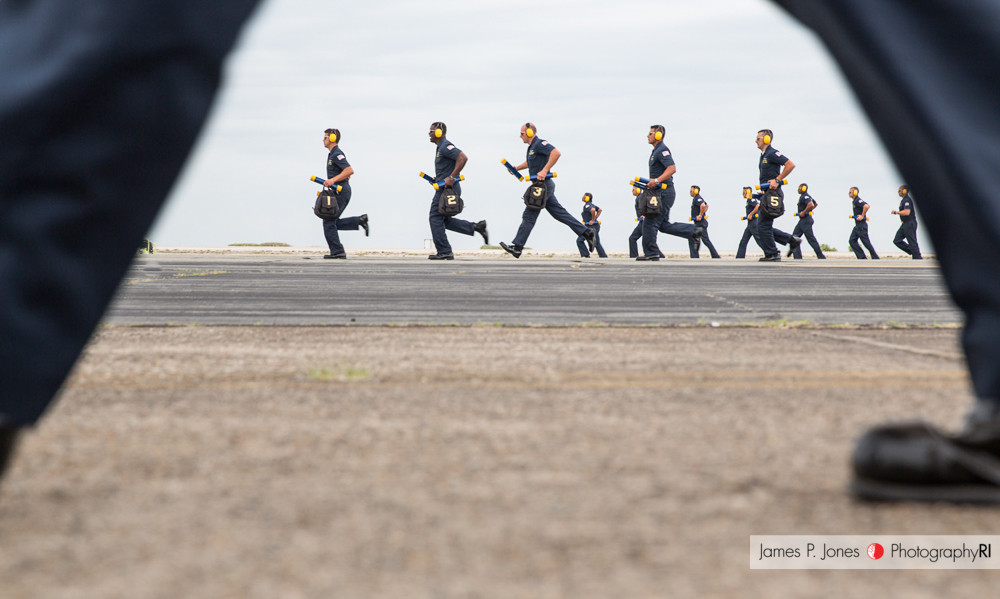 Nothing happens in a vacuum and these swift boots make everything happen for the Blue Angels. 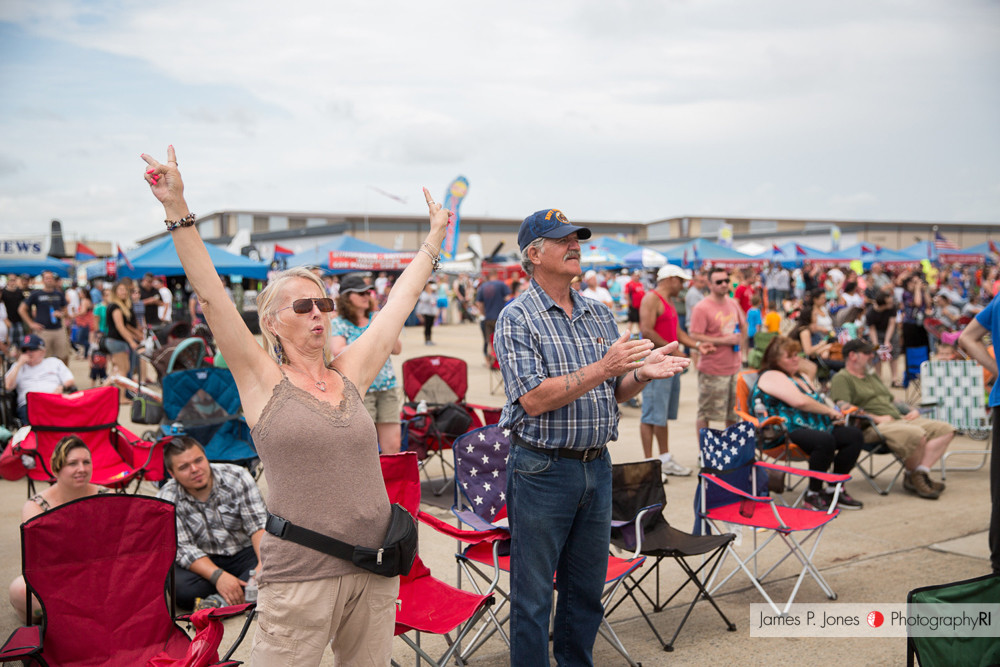 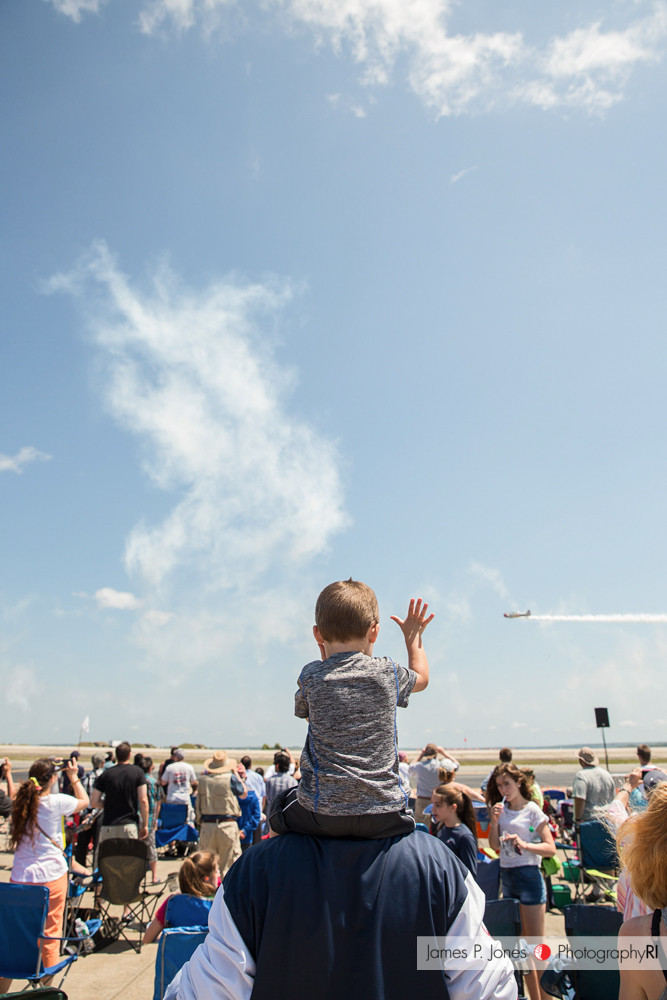 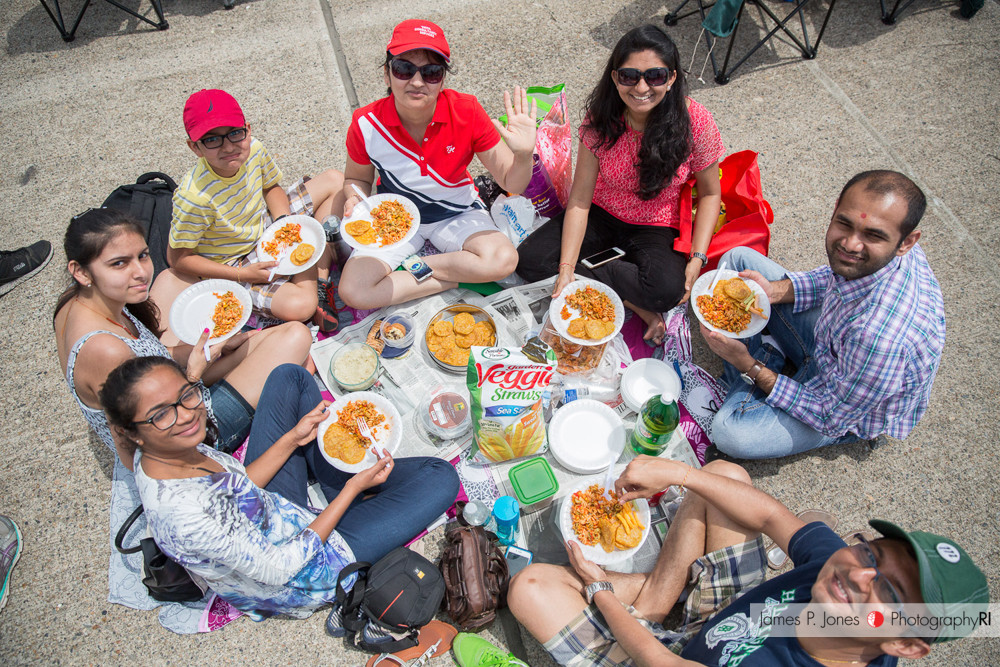 These nice people had the best food I saw that day and they shared it with me. It was delicious. 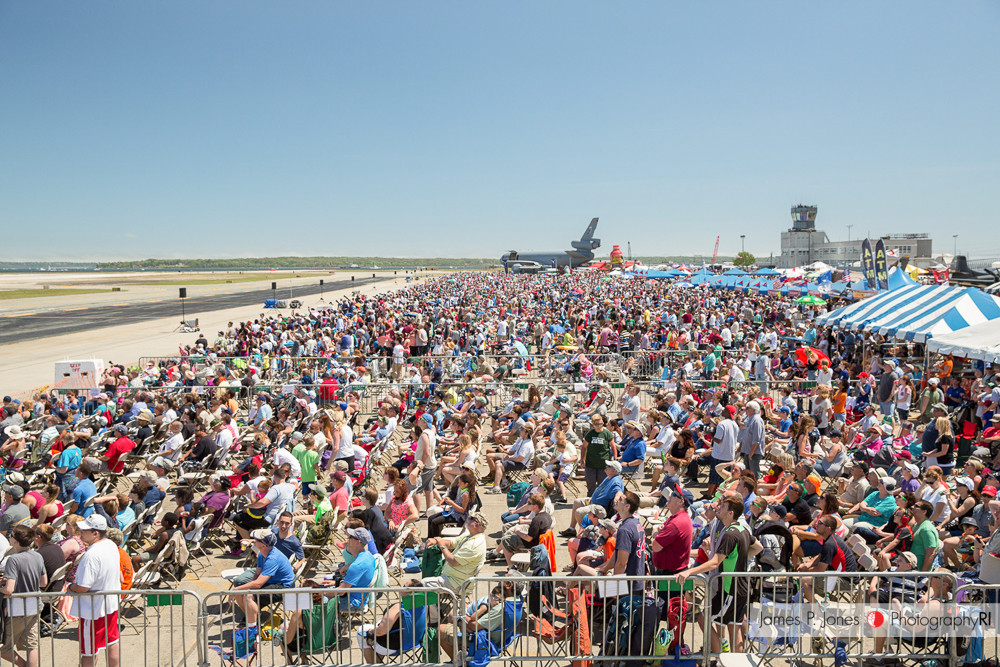 All those colored dots represents a lot of sunscreen and funny hats. Tens of thousands of people attend each day. 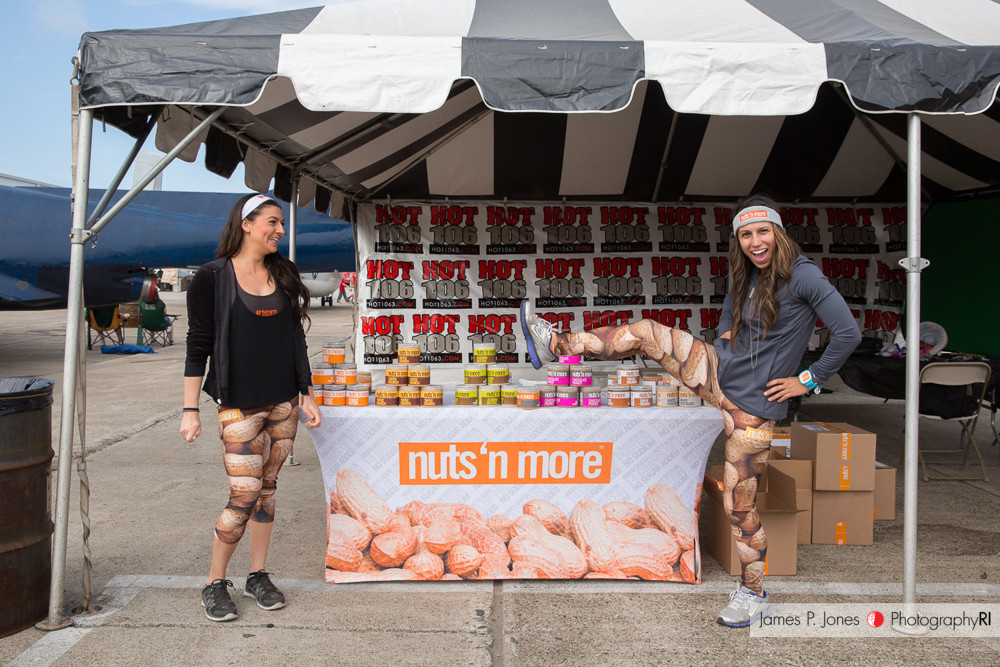 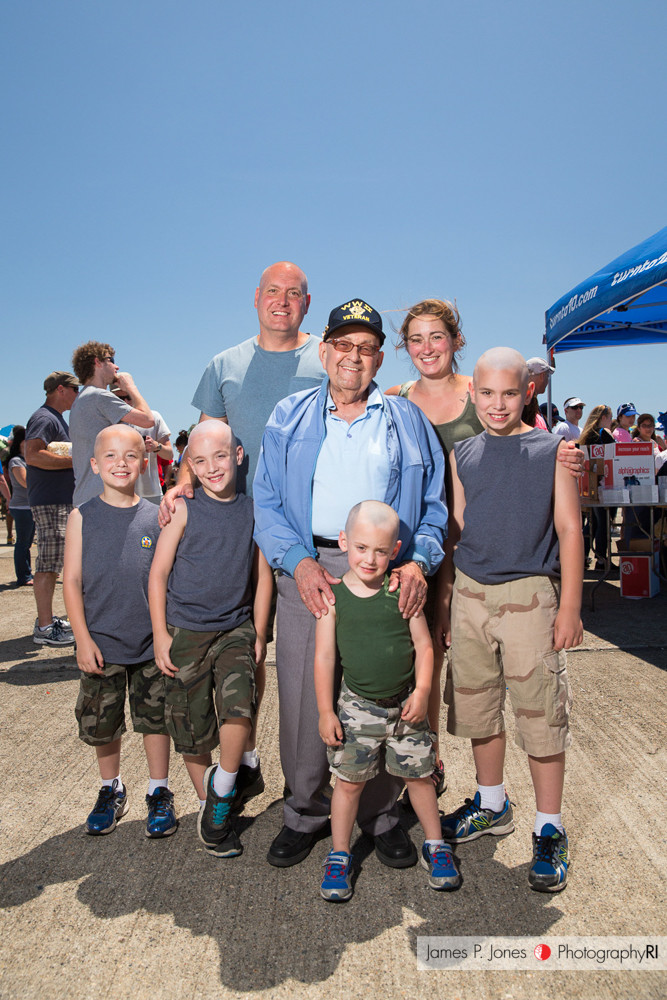 This WWII vet and his grandkids (great grandkids?) were having a great time. That old fella stood the entire time I was at the show and he was wearing a coat. I think my shirt had melted onto my back before the midway point. Unbelievable. 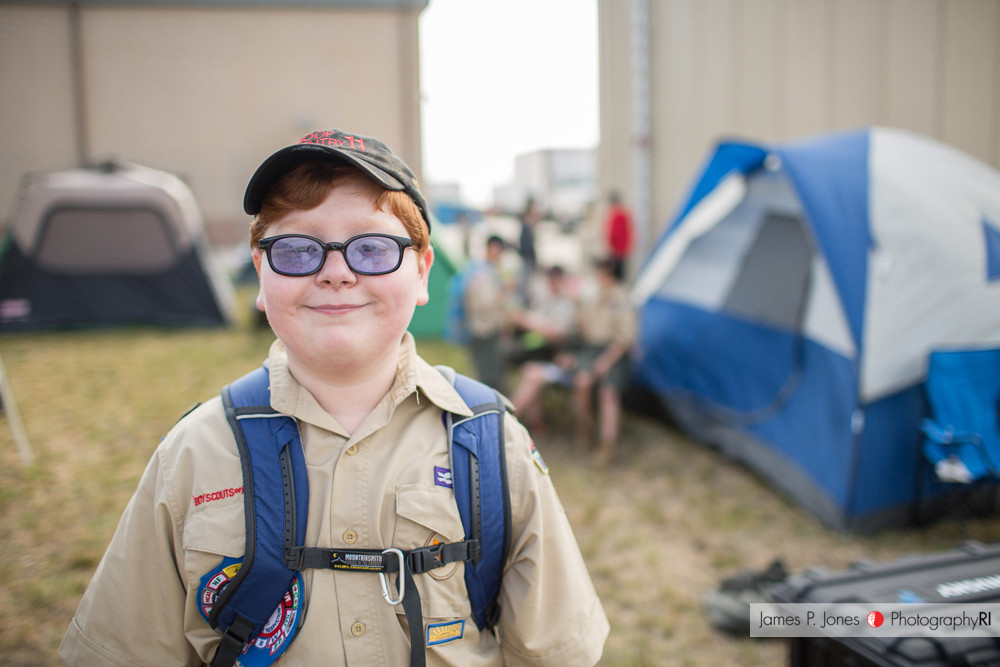 Boyscouts were there camping too. And this little guy – he just makes me smile. 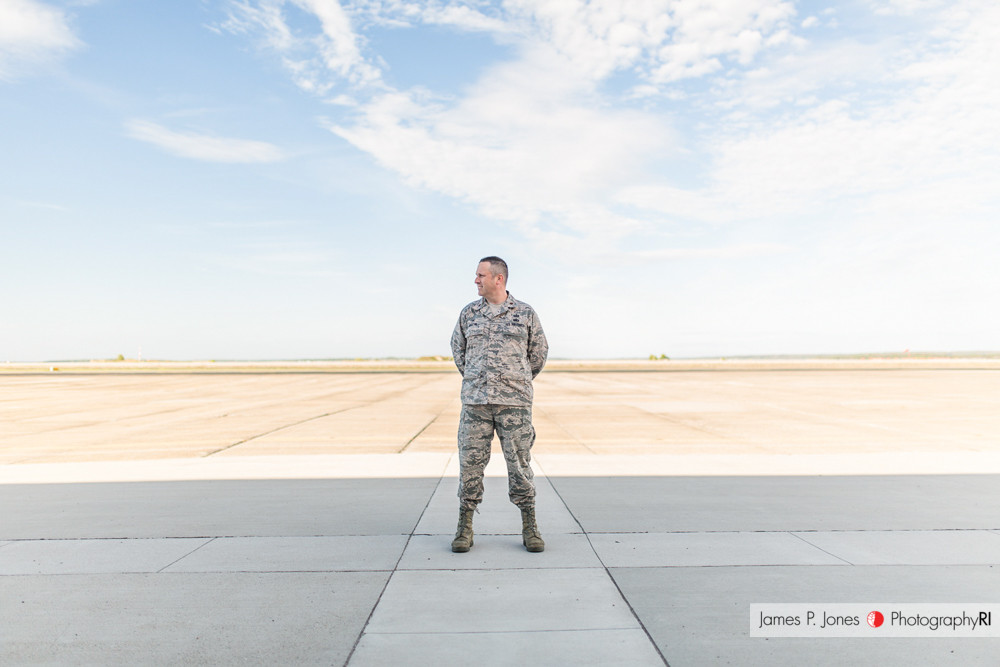 Major Mike Martin is the guy who directs the whole affair. He also doesn’t like being in the spotlight. So, if he reads this he may be mildly annoyed that I put a big picture of him in. 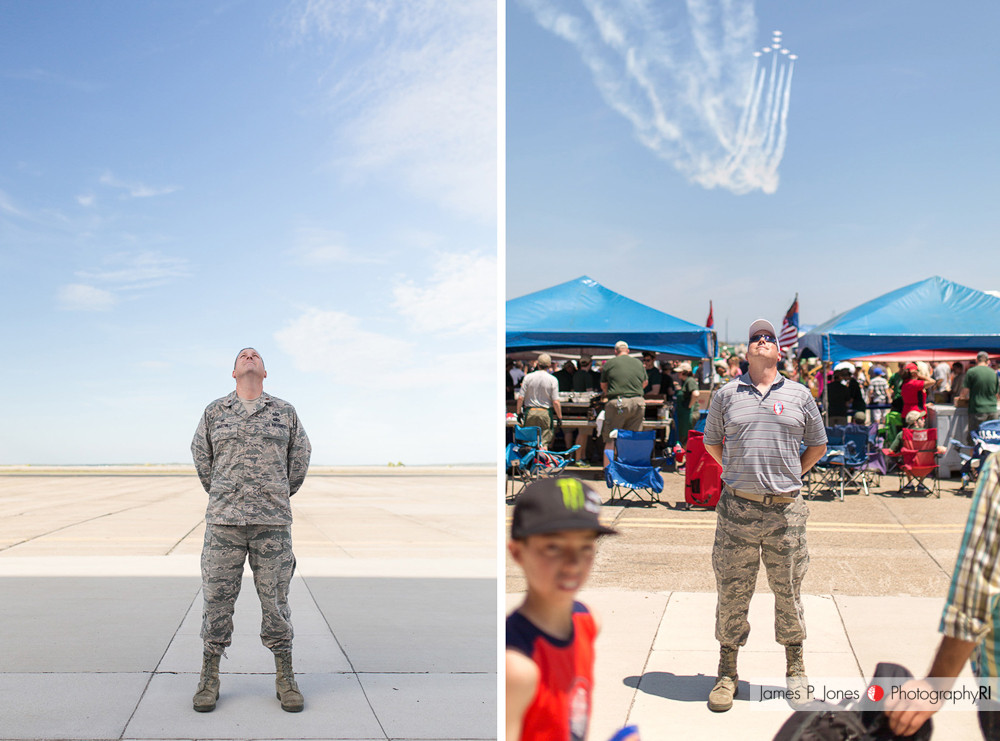 But, at the end of the day this is a huge logistical project and it needs a dedicated leader. He has been coming to this show since he was a kid. His dad was a performer. On the left is before the show and the right is during the peak of the show. Tens of thousands of people, tons of ice, over a hundred rental cars, hundreds of porta-potties, and thousands of man-hours go into the making of the show. State police, local fire, hospitals, national aviations groups, the FAA, the Air National Guard and many more bring their time and expertise to the table. 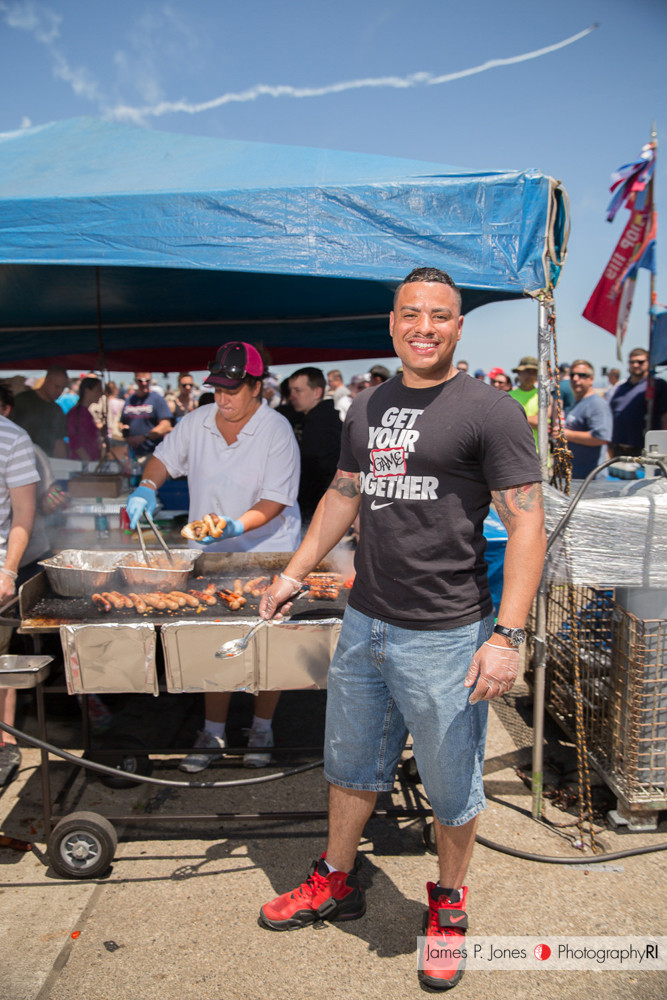 Volunteers from the military and elsewhere use the event to raise funds for charity. It’s a great gig but damn hot. 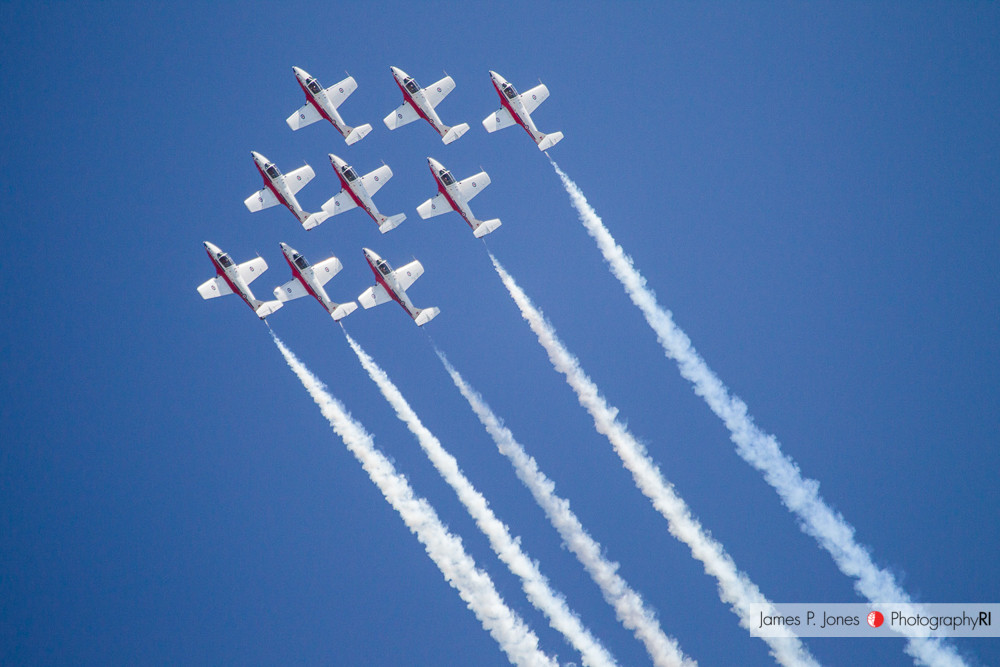 We even had flying Canadians. 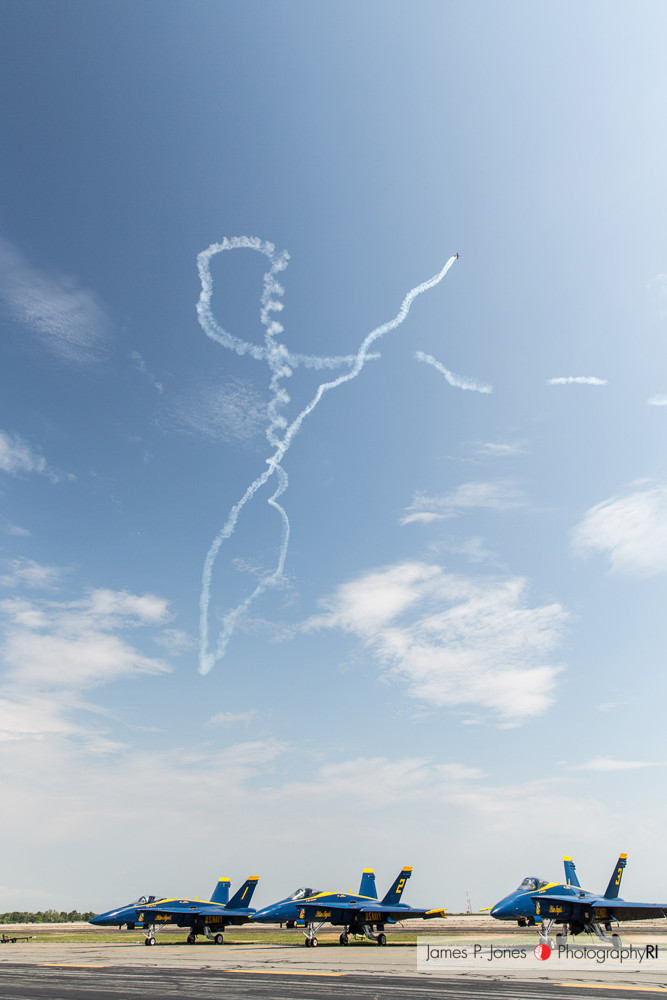 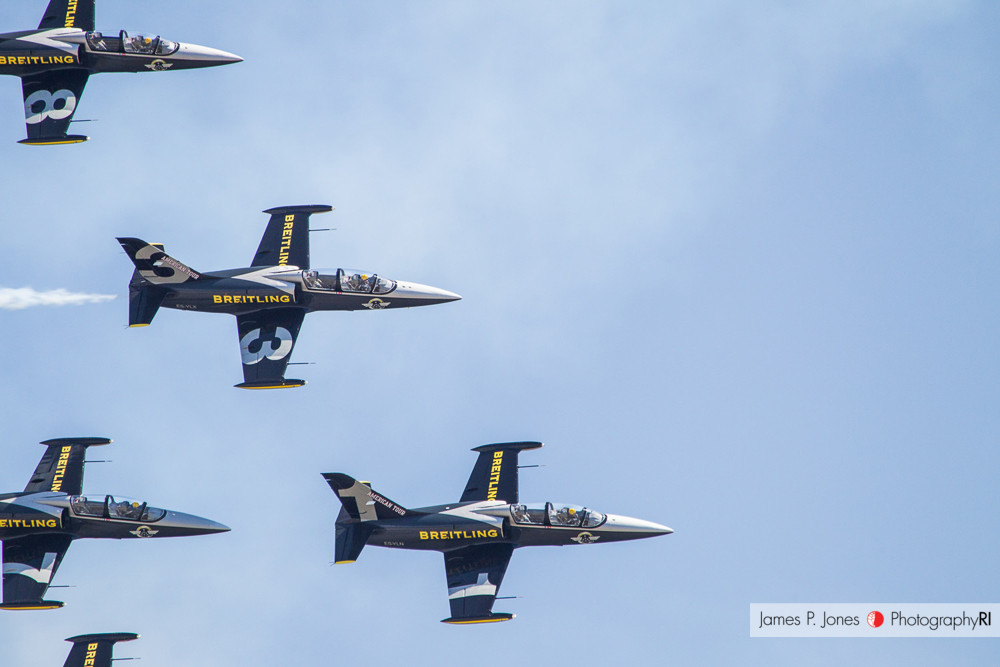 And the French (or at least French pilots on a British team). 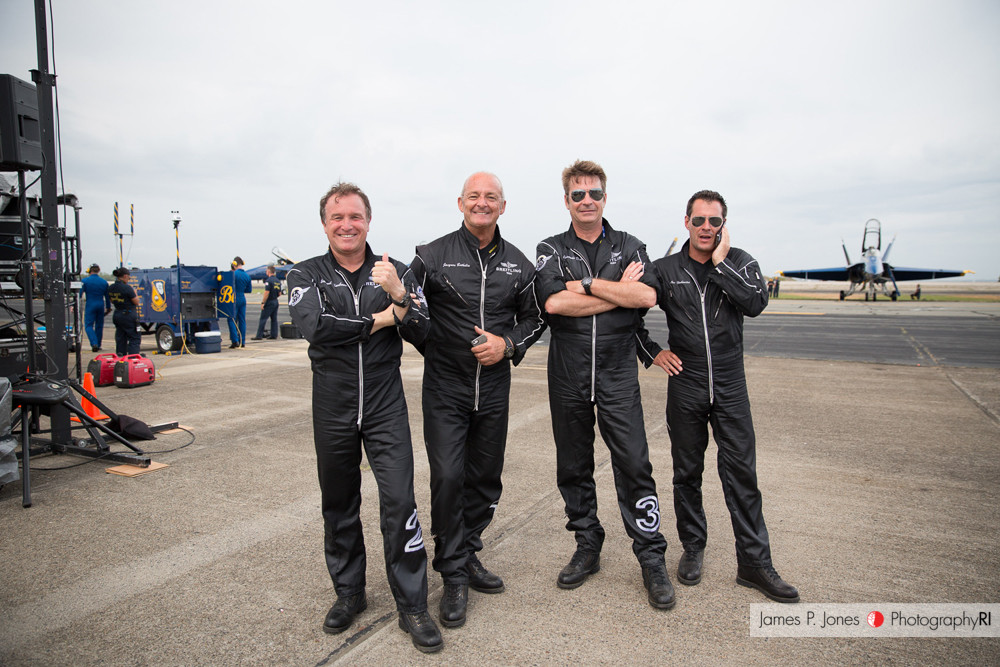 The guy on the right may be my favorite for his general disdain for having his photo taken (thus on the phone) but still having his hand on his hip. The Breitling team is all former french military pilots and these guys look ready to be cast in a movie. 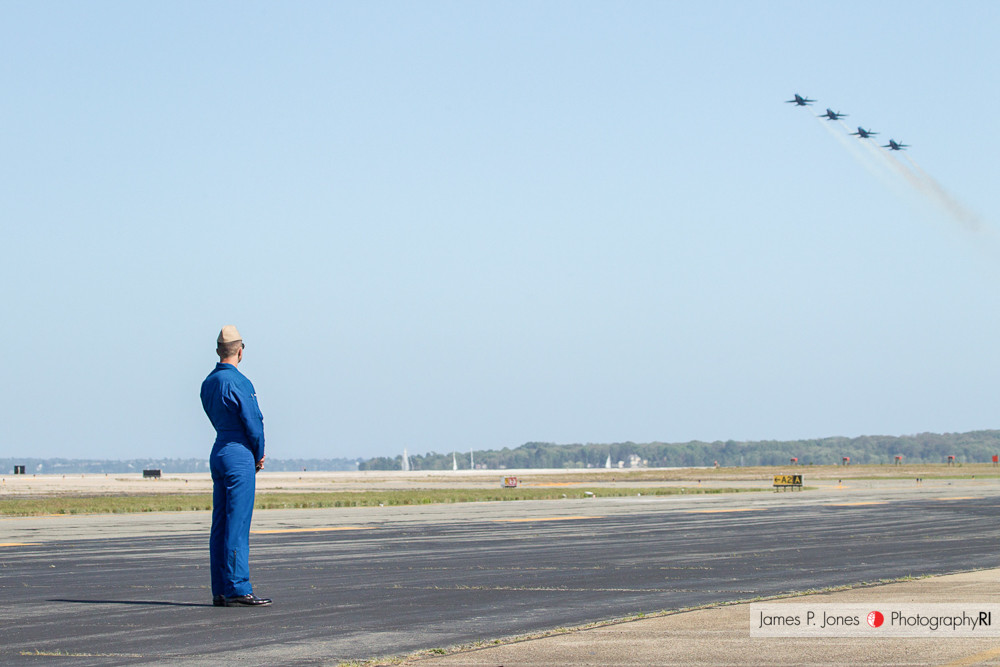 Marine Captain Jeff Kuss (pictured here when he served as announcer in 2015) lost his life earlier this year flying with the Blue Angles. From what I have read he threaded an extremely small needle –  after suffering a mechanical failure he purposefully flew his plane into the ground in a tiny patch of land between apartment complexes and a historic home to avoid casualties. My heart goes out to his young family.